MD, PhD, Prof. emer. of Neurosurgery and Medicine (1997) – former founding director and head of neurosurgery at the Faculty of Wroclaw Medical University 1968, 1983 Director of the 52-bed Clinic of Neurosurgery with ICU and neurosurgical neuro-radiological laboratory (first in Poland1973).1999 Honorary President of the Polish Society of Neurosurgery, Honorary Member of the Central European, the German, Czech and Slovak Societies of Neurosurgery.(Neurologia I Neurochirugia Polska 2013; 47,1; 94-96) Dr. Wroñski became the leader and representative of Polish neurosurgery, not at least because of his outstanding personality and scientific skills as an open-minded European personality during his participation and teaching at international conferences abroad, e.g. AANS, EANS, British, Scandinavia , and WFNS neurosurgical congresses. Member of the Scientific Committee of the Zentralblatt für Neurochirurgie ; 1966 Member of EMN Advisory Council after we have met first in 1995 at the Join meeting of the Polish and German Societies for neurosurgery in Seeheim-Jugenheim, jointly organized by Dr. Jerzy Wroñski and his friend Prof. Rüdiger Lorenz, Frankfurt Med. University Hospital, who later received his Dr.h.c, at Wroclaw Med. University. Rüdiger Lorenz and Jerzy Wroñski knew each other already very well years before they both, at June 15, 1991, hosted the Joint Meeting of the Polish and German Neurosurgery Societies in Breslau (Wroclaw) on the occasion of the 50th anniversary of the death of Ottfrid Förster (1873-1941, Wroclaw). That friendship meeting turned out for all our DGNC members to be the highly deserving reconciliation of Dr. Wroñski for Poland and Germany and the new beginning of previous close scientific cooperation and friendly ties between both the Polish and German societies! In this context I should mention here that our colleague Jan Zierski, MD PhD, with Polish roots, became the chair of the Polish – German Commission for Cooperation in 1994.Up to this date the 4th Polish-German Convention of Neurosurgeons in Wroclaw-Krzyzowa 1999, organized at its best by Jerzy Wroñski just before his official retirement, is extremely impressive in my memory.

I invited Dr. Wroñski with some of his colleagues and friends as our guests to join actively the 2nd EMN congress in Münster, when Prof. Wroñski as referent and an experienced scientific chair guided the EMN – Poster Session “Meet the experts” . Since then he, as our EMN academician and member of EMN council – and even more my personal friend – joined actively our events, opening our doors for a most fruitful and friendly scientific exchange with our Polish colleagues e.g.: Prof. Zbigniew Czernicki, MD.,PhD. from Warsaw, Prof. Andrzej Radek, MD.PhD., from Lódz, and Prof. Tomasz Trojanowski MD, PhD, from Lublin, as well as some others. With the death of Jerzy Wroñski, European Neurosurgery has lost an outstanding medical doctor, professor of neurosurgery, and bridge- builder, and we, together with my wife Monika, have also lost a very special, fine, generous friend who continues to accompany me with joyful, grateful thoughts. 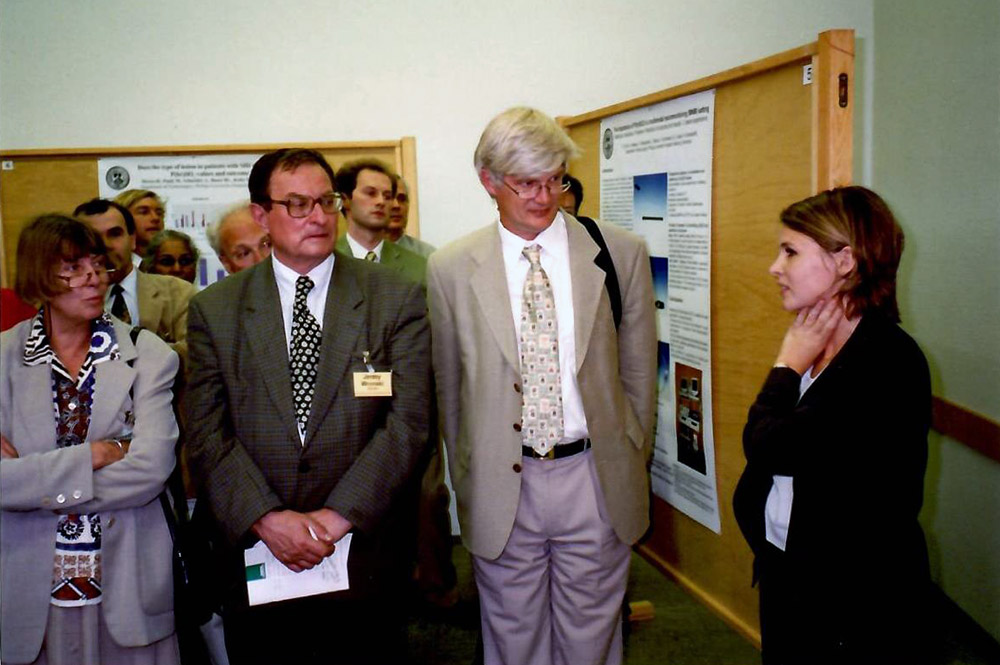