Prof. emer. für Neurologie, Dr. med. Dr.h.c.mult. Mein Lehrer für AS : 1975 Prof and Primarius II. Department Neurology City Hospital Wien  – Rosenhügel https://de.wikipedia.org/wiki/Franz_Gerstenbrand; 1976 – 1994 Prof. for Neurology and Director Med. University Innsbruck; 1994 until his death Founding director of Ludwig Boltzmann Institute for Restorative Neurology, Vienna A. As Franz Gerstenbrand repeatedly told me, three factors were decisive for him, the passionate European, neurologist and neuroscientist: 1st and foremost The 2nd World War, when he was recruited into the German Airforce after finishing his school, 1942 -1945; 2nd His medical neurological personality as well as his European social- political behaviour and competence were influenced by two great personalities: a) his teacher Prof. Hans Hoff, Director of the Psychiatric- Neurological University Hospital, Vienna, and b) Mr. Bruno Kreisky (1911 -1990), SPÖ, the Austrian Foreign Minister (1959 to 1966) and Chancellor (1970 to 1983). Our trustfully scientific cooperation in of coma research and rehabilitation developed accordingly from 1990 , when Franz was my guest of honor at our first int. congress on early neurorehabilitation in Münster. However, we had already met in Munich, 1972 . It was at a conference on “Apallic Syndrome” (published by F.G .1968), the clinical and scientific topic of his life. I presented together with Prof. Giuliano Dolce, for the first time ever, our neuro-pharmacological FFT- eeg- studies on the effectiveness of Pyritinol (Merck Darmstadt) in “Apallic syndrome” (AS) at the neurosurgical ICU in Frankfurt. We were able to achieve a safe wake-up effect in some of otherwise mentally unresponsive proven AS victims of the cohort (Ref.197). This was something new for Prof. Gerstenbrand, which in the following years kept us talking about new strategies in AS patients’ rehabilitation.- Foto Gerstenbrand vor dem Plakat der EFNS in Paris

1998, at the 3rd EFNS Congress, Seville, Spain, 1998, when José Leon Carrion was congress president, Franz asked me to take over now the neurotraumatology working group, focussed on AS/VS and on MTBI within EFNS, which he found himself. (Ref. EFNS Guidelines on AS and on MTBI). Finally Franz paved the way for me, as a neurosurgeon and specialist for early neurorehabilitation, to join the new established board of the WFNR in Venice, when took part 2003 . Until his death we discussed our joint projects on a friendly basis and brought them forward, including actual strategies for Stavros Baloyannis new “Society for amelioration of no treatable disease. Franz introduced me to Prof Stavros J. Baloyannis shortly after its establishment. From this a witty and warm-hearted friendship with Stavros grew up including our wives to this day. May our friend Franz Gerstenbrand rest unforgotten in peace with the obituary of our dear friend Stavros: Ref: Stavros Baloyannis:2017 Franz Gerstenbrand (1942 – -2017) The World Ambassador of Neurosciences in Memoriam Aeternam: https://www.academia.edu/ 399742/Franz_Gerstenbrand_pdf 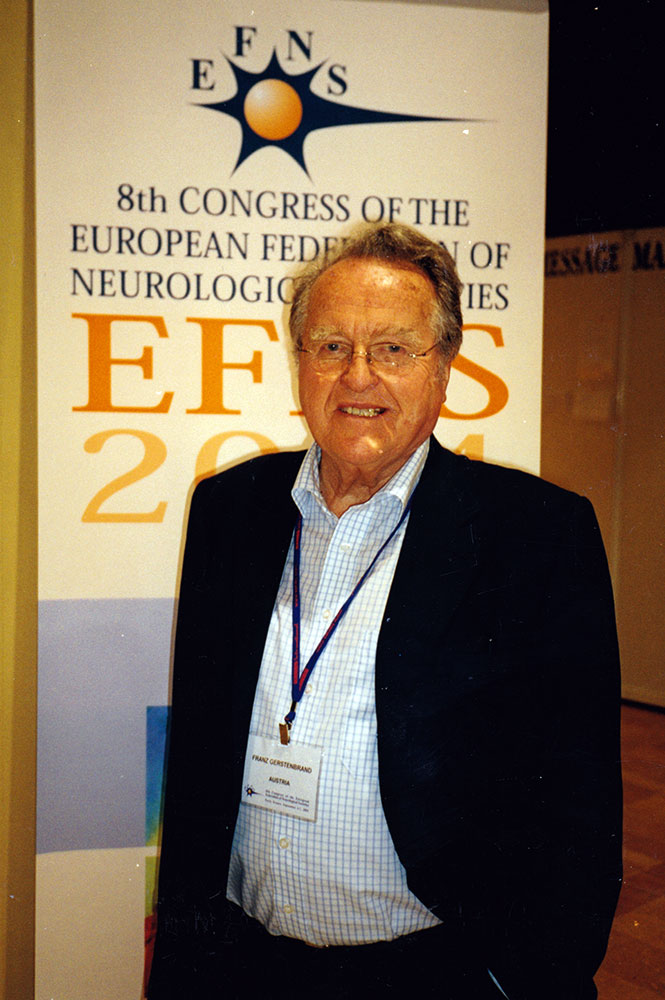