Newcastle, UK FRCP FRCS Prof. emer. of Neurosurgery. Honorary Professor in Mental Health and Wellbeing in the Institute of Health and Wellbeing at the University of Glasgow Medical School. Sir Graham Teasdale is an EMN Honorary Member and 7th EMN D. Miller Memorial Lecturer. AMN?
https://en.wikipedia.org/wiki/Graham_Teasdale_(physician); https://www.glasgowcomascale.org/ Citation: By 1981 he was Professor of Neurosurgery, leading a multidisciplinary collaborative team. Teasdale was President of the Society of British Neurological Surgeons between 2000 and 2002, President of the Royal College of Physicians and Surgeons of Glasgow between 2003 and 2006 and was made Knight Batchelor in 2006 for services of Neurosurgery and victims of head injuries. He is also a Fellow of the Academy of Medical Sciences and the Royal Society of Edinburgh, and has received the Distinguished Service Award of the American Association of Neurological Surgeons and the Medal of Honour of the World Federation of Neurosurgical Societies. Sir Graham led a project to understand the current use of the Glasgow Coma Scale, its successes and its perceived shortcomings. Graham Teasdale’s long interest in head injury and clinical research began during his basic medical and surgical training at the Royal Victoria Hospital, Newcastle, where he worked for Mr G F Rowbotham , author of the then standard British textbook ‘ Acute Injuries of the Head’. Subsequently, with the opportunity to train in Neurosurgery at the Institiute of Neurological Sciences in Glasgow in the 1970s, he joined the world class team led Professor Bryan Jennett. Now retired, Teasdale nevertheless maintains an active interest in the traumatic brain injury research, in between fly fishing”. End of citation.
We will not forget, as he once advised us in Edinburgh after a Neurotrauma meeting to go to the small village Of Blocks at the sea, to enjoy the landscape in its silence, the open sea, and the singing of many robin red-breasts. Right he was! We met Graham again and again privately or at scientific meetings as friends, even with our wives, or discussed, often controversially, always engaged about the meaning and purpose of GCS and GOS with regard to TBI- and Stroke – patients long-term outcome (HRQoL) and quality of life (QOLIBRI). At the end our we got is approval for our new transdisciplinary concept of acute neurosurgical early rehabilitation already in the intensive care unit, including multimodal bed site monitoring.- In 2014 we have last met in Moscow, when he was honoured by honorary professorship by Prof. Konovalov and Prof. A. Potapov bot at the N.N.Burdenko National Medical Research Center of Neurosurgery on occasion of his 40 years anniversary of GCS publication. Foto 1. Hatten sie das Rollbild von dem EANS Kongress in England schon gescannt?
2. Teasdale at 7th EMN Newcastle June 27, 2002, Sir Graham Teasdale after his presentation of EMN Honorary Douglas Miller Memorial Lecture
3. Foto Moscow 2014 Prof. honoris causa at Burdenko NSI together with Professors Konovalov, Potapov von Wild . Gruppenbild (neu), ausgedehntes Querformat aller Teilnehmer!) 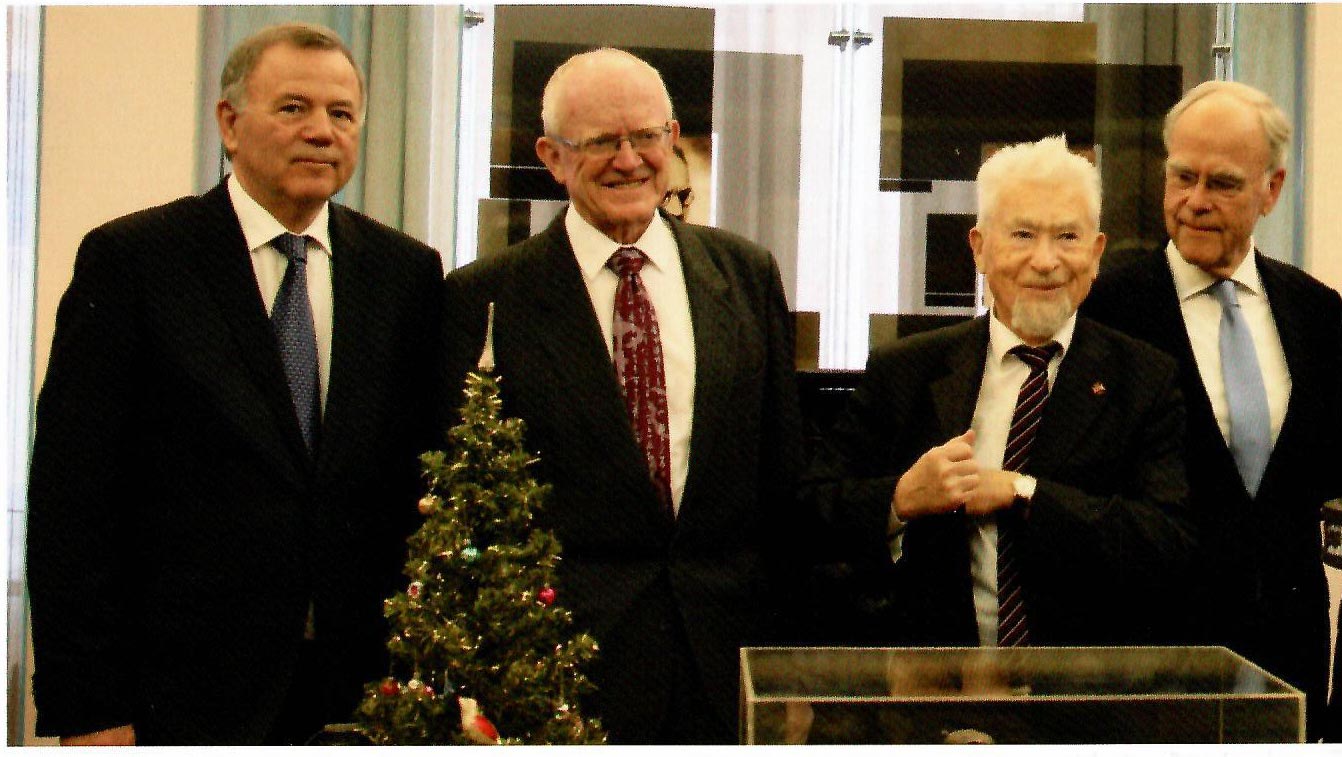 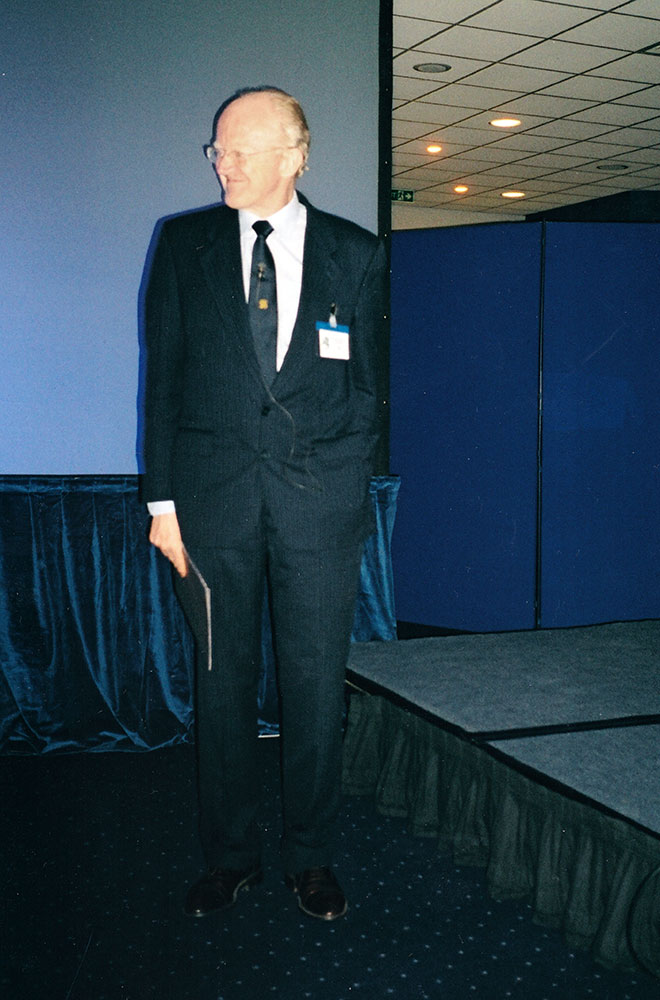 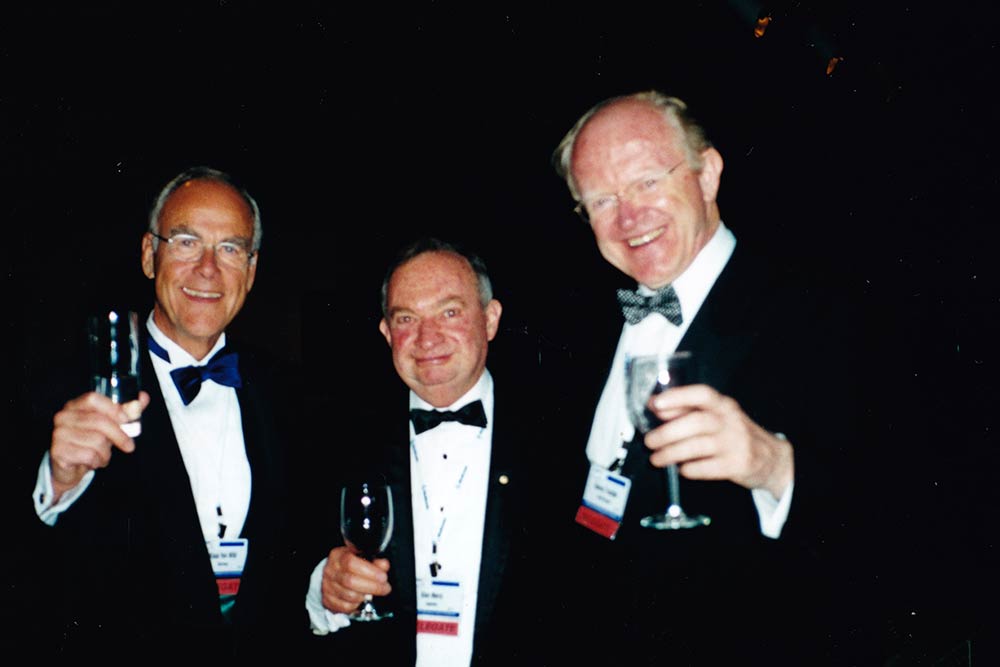 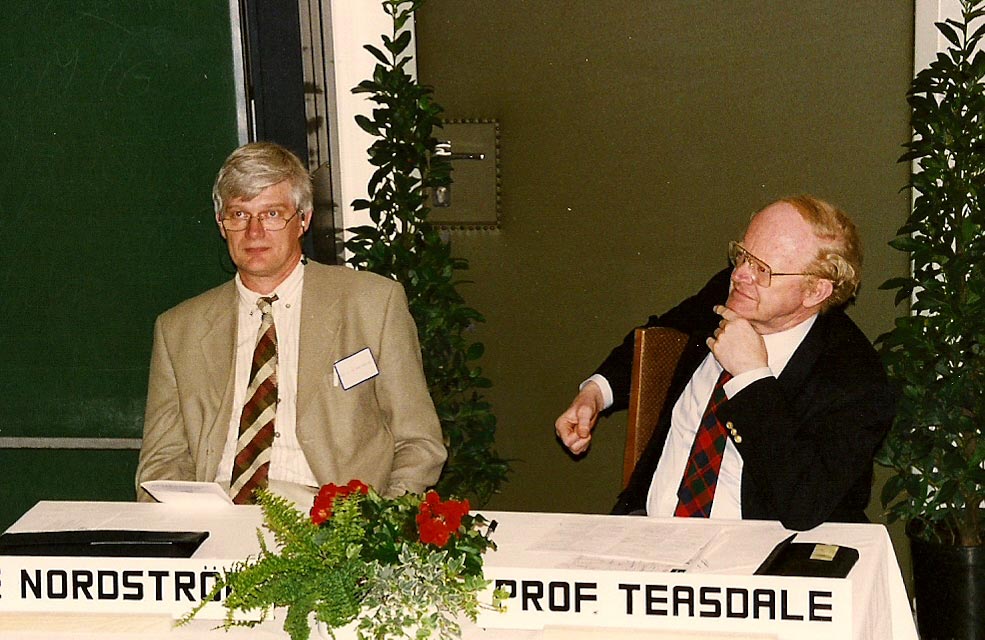